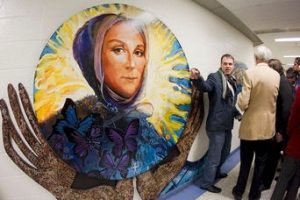 Lewis Lavoie (in grey next to painting) and art teacher Pam Wilman worked together with 120 ESSMY students to complete a mural honouring the school’s patron saint, Marguerite d’Youville. The project commemorated St. Albert’s 150th anniversary and the work the Grey Nuns did in the community.

Lewis Lavoie led the countdown Monday morning as students, school board representatives, teachers, and representatives of the Grey Nuns unveiled a mural at Ecole Sainte Marguerite d’Youville (ESSMY). “We haven’t seen it yet. We had a plan and we all painted the tiles, but we haven’t seen the finished work yet,” said Grade 12 student Lauren Henderson. “Ten! Nine! Eight …” everyone chanted. The paper was ripped away to reveal the face of Sainte Marguerite d’Youville cupped by two hands, which represent the spirit of the Grey Nuns in St. Albert. To complete the theme, 150 student-painted tiles depict the Sisters’ work.

The project took more than a year of planning and research. The idea began with art teacher Pam Wilman’s desire to have her students redesign and paint an existing wall mural as part of the City of St. Albert’s 150th anniversary celebrations. “We had a relief mural in the hallway that showed hands holding the Earth and from the Earth there was a rainbow. So we reclaimed that existing mural,” Wilman said. The school’s namesake, Sainte Marguerite d’Youville was to be the focus of the new mural, which allowed the students to learn the history of the woman who founded the Sisters of Charity Grey Nuns.

“Leadership for the research was done by David Ibsen, who is with the Faith in Action Project and by the St. Albert Historical Society,” Wilman said. The Grey Nuns, the Knights of Columbus and the Canadian Parents for French Education provided funding. Lavoie, who is known for his mural paintings, was asked to design the project and to work with the students to create the art piece.

“I drew inspiration from Marguerite d’Youville. Her story can’t be told enough. And the Grey Nuns did so much for St. Albert. This city was built on the backs of the Grey Nuns,” Lavoie said. Lavoie’s portrait of the saint is true to the known portraits of the woman. Because he featured her face in the centre of the work, it’s as if she is the sun and everything radiates from that. Her skin hue is warm and bright and truly beatific.

In all, 120 students painted 150 tiles for the mural. “The senior high students did the 12 tiles that told the story of Marguerite d’Youville’s life. The junior high students painted the tiles that tell the story of the Grey Nuns,” said Grade 12 student Lauren Henderson. Henderson’s painted tile depicts a portrait of d’Youville caring for a patient. “I wanted to show that she really cared about people,” said Henderson. Grade 11 student Rebecca Lazarenko chose to show d’Youville receiving communion. “Even though I showed her in darkness, I also wanted there to be a glow about her,” Lazarenko said. Grade 10 student Kayla Zimmerman also chose to show light within the darkness. “I painted the night Marguerite d’Youville died. I learned to do the shadowing on the house,” Lazarenko said.

Several members of the Grey Nuns were on hand to watch the unveiling and they were quick to point out that the work shows not just hard work and research, but also love. “So much work went into it. So many hands contributed to such a long project that shows reflection, thought and collaboration,” said Sister Madeleine Therrien, who presently volunteers at Youville Home. Therrien, who has been a Grey Nun for 62 years, was pleased to see the tribute to her own society. “This is the story of a great woman who left a great legacy. But it’s like so much that we have done. You can’t set out alone to accomplish things. You must work as a group. This work is like all the work the Grey Nuns have done and all that we do,” she said.