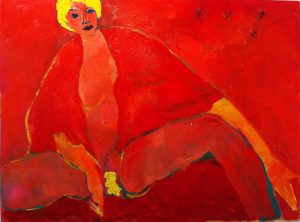 Violet Owen’s exhibition Modern Woman, curated by Shane Golby and Chris W. Carson, is a testament to the endurance of the female form as an artistic subject. In spite of the abundance of images we encounter on a daily basis, the painted nude is still able to titillate and shock. Perhaps this has something to do with the medium of paint—the thought of one posing for great lengths of time in various stages of undress—or perhaps it is the fact that nude paintings carry with them an aroma of personality that is so lacking in our hyper-sexualized society. One of the strengths of Modern Woman is indeed Owen’s portrayal and plastic manipulation of her female sitters (including a few haunting self-portraits), in which she does not censor her subject’s raw physicality or emotive potential. Whether nude or clothed, Owen’s subjects are overwhelmingly expressed through varying degrees of abstraction, with her more recent work continuously pushing sculptural and aesthetic boundaries.

What makes Owen’s paintings, drawings and sculptures ‘modern’ is twofold: her aesthetic is reminiscent of the art being produced during the early 1900s in Paris by the Post-Impressionists and Matisse’s Fauves, which is now classified as modern in the spectre of art history; but she is also addressing very contemporary, or hyper-modern, societal trends. There has been much talk about feminism, in all its various forms, in the media and within pop culture as of late (perhaps the most iconic moment is Beyoncé’s performance at the Grammy’s in 2014, in which she stood alongside the word F E M I N I S T while evoking Chimamanda Ngozi Adiche’s infamous TED talk, “We Should All Be Feminists”). The strength of Owen’s paintings lies in their ability to embrace her sitters’ and her own imperfections; there is an intimacy in her subject’s willingness to allow themselves to be portrayed in such confidential and realistic poses. To contradict the airbrushed plasticity that is so often demanded of women in the media, the home, and in the workplace is to declare, whether intentionally or not, that modern women are in charge of their own sexualities, destinies, and lives.

There is a quote in the exhibition by Owen in which she states that she is “not a socially conscious painter or environmentally conscious painter. (My work) entirely revolves around my own personal relations with other people.” While it is nearly impossible to escape the oftentimes misogynistic history that accompanies female representation in painting—of the male gaze that is evoked in historical artwork and contemporary artwork alike—I understand Owen’s frustration. I can only imagine that during her early artistic career (one that spans six decades) reviewers, historians and the public would have approached her subject matter from the patronizing angle of ‘female art’ (put another way, as simply a painter of the domestic sphere), whereas her male counterparts likely didn’t receive the same designation for similar work. While the viewer does not have to forego the historicity of the female form in order to enjoy Owen’s work, it is important to realize that Owen prefers to see herself as a painter pushing formal and aesthetic boundaries first and foremost and not as an advocate for politicized feminism. As someone who studied art history and follows societal trends, I certainly chose to view the artwork on display from a more theoretical angle. The exhibition itself, however, does not over-emphasize the political, choosing instead to focus on the uniqueness of Owen’s oeuvre within the Edmonton arts scene. In this sense, Owen encompasses a very contemporary dilemma indeed: how to represent the female form without having to make a statement regarding the status of women in art or pop culture. In this case, I think the artwork featured in Modern Woman stands as a testament to Owen’s continued relevance and creative determination—her artistic, societal, and political statements, or non-statements, can be found in the artwork itself.