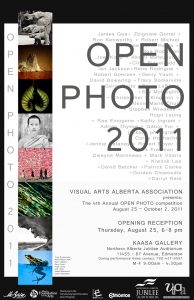 Held off-site at the Kaasa Gallery in The Northern Alberta Jubilee Auditorium in Edmonton, Visual Arts Alberta is pleased to present the VAAA 4th annual photography competition & exhibition. OPEN PHOTO 2011 exhibits some of Alberta’s finest photographers. Visual Arts Alberta received an overwhelmingly positive response to this open call and all applications went through a selective jurying process. Our guest juror Eleanor Lazare will choose the best over-all photographer, as well as honorable mentions, prior to the opening reception. Awards will be announced at the opening reception, and the award winning work will go on to be exhibited in Calgary at The Southern Jubilee Auditorium October 2011.